Rich and punchy, this dish of pomegranate and tamarind stewed eggplant and lentils is a wonderful example of the diversity and nuance of regional cooking in Belad El Sham. Variations of this modest dish abound from the generally simpler Gazan rummanieh to the more complicated Syrian-Lebanese houraq osba’o, this version is the one my grandmother from Yaffa would always make. It was an absolute childhood favorite of mine, and more often than not you would find it snuck on the side of our lunch table before being yanked smack in the center.

The fragrant stew is absolutely heartwarming. Sweet and sour thanks to the pomegranate and tamarind, the lentils and eggplant transform as they simmer into a splendidly hearty mixture. The aroma of the cumin and chili balance out these flavors, adding a hint of spice in the background. Over the next few days, these tastes continue to mingle, developing an ever more complex result. Eaten warm or at room temperature, with just about anything from bread to rice or simply with a fork, this will steal the show day after day. We’ve served this at the restaurant for years. Working on the recipe marks a distinct moment in my memory, it was one of the first dishes that another cook took all the way from inception to implementation. Sara, our sous-chef of several years, also has roots in Yaffa and grew up adoring this. She worked on perfecting the recipe for many weeks, and in the years since it's been tweaked every now and then.

We’ve taken a few liberties in this recipe. I’m not so sure that my grandmother used tamarind in addition to the pomegranate molasses, but we quite enjoy the added depth it brings. You can use both, one or the other. If you’ve never used tamarind seeds before, don’t be intimidated. They’re readily available at supermarkets, usually peeled and pressed into small bricks. Soaking will loosen them up before picking the seeds and passing through a sieve. We make a sort of glaze here that is mixed into the stewed eggplants and lentils. You’ll probably have some leftover, keep it in the fridge and use it in a salad dressing or to glaze roasted vegetables. If skipping the tamarind, you can also omit this step and simply add the molasses directly into your stew.

At the restaurant, we plated this in cups of toasted shrak bread brushed with olive oil. We would fill the cups with the stew, flip them onto the plate and apply one swift smash to the dome using the back of a spoon. That spot is where we would lay luscious fried batiri eggplant glazed with tamarind and garnish with radish, coriander leaves, green chili and pomegranate seeds if available.

We’ve omitted these to make this recipe less cumbersome for the home cook but feel free to include them if you feel so inclined. Simply brush a steel bowl with olive oil, lay down two or three layers of shark bread brushing with olive oil after each one and roast it at 160C for a few minutes until golden. Fry or roast the batiri eggplant whole cutting a small cross in the bottom, or use large wedges of regular eggplant, and generously brush with the tamarind glaze in this recipe after cooking, preferably on a wire rack.

The key to making this is being confident in your own cooking. Taste regularly. Trust your gut and adjust the seasoning to your liking. Few other dishes put the critical balance of sweet, sour, salty and spicy on such clear display. Too sour, add a small spoon of date molasses or brown sugar. Too sweet, a squeeze of lemon may do the trick. Use your senses and don’t be too afraid to mess it up. 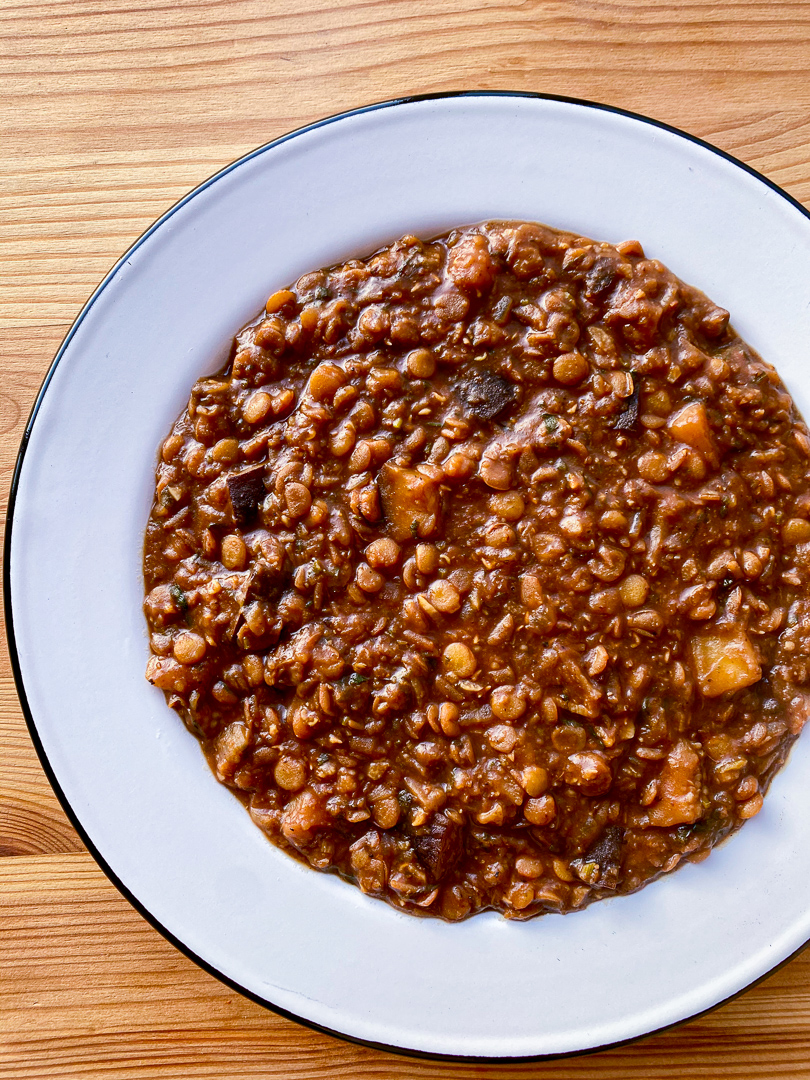